Today, I was asked. “Aren’t you bothered of how people treat you because you are a Muslim (in a non-Muslim society)? People keep on asking you questions.”

Well, that actually depends on how one would ask me questions.

It is not new to me, and probably even you, that the society has a lot of misconceptions on our religion, Islam, that translate to stereotypes. Terrorism and crimes were usually tagged when “Muslim” do unwanted things.

All these happen due to lack of knowledge, or even ignorance.

While much information is accessible, no one, or probably only a few, would effort to straighten out things, ideas or issues that they do not or barely understand, nonetheless, something that is not personal to them.

This is why when someone gets to know a Muslim like me, their subconscious curiosity arises, because finally, they got to know one personally.

From the most basic thing, “How do you call that thing on your head? Why do you wear it?” to deeper issues, “Why is polygamy allowed in Islam?” which requires intense discussions to fully understand, those are the typical interests of non-Muslims.

I do not know if any of these conversations actually address the stereotype society has on us, but one thing I have learned is people are not that bad at all, and that not many sees Muslims badly.

“I get this impression that you guys (Muslims) are damn nice!” My colleague told me as he shared how he have had Muslim friends even before meeting me.

I am usually hesitant in approaching strangers, or even my acquaintances. I was afraid that they would be afraid of a Muslim like me, or they disliked Muslims, etc.

I was boxed in that image, that stereotype the society has on us. Perhaps, I was basically stereotyping people not of my culture too.

Most people, if not all, would throw me questions out of plain curiosity. Nothing more, nothing less. That, I do not mind.

I would be glad to show you how beautiful Muslims and Islam can be. 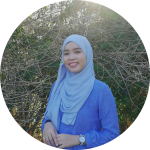 Hani Abbas is a passionate soul who strives to become a better version of herself everyday. While she highly regards her inner world, she is an introvert who is in search of deep connections among hoomans. As a career woman, Hani was formerly a journalist, but now pursues PR industry, developing her untapped potential and passion.