It got hit by the whirled, propeller blade of the electric fan in my room. First, pinpricks of blinking lights, then, caught by the wind that sneaked its way on the hinges of the window, it fell down, like shooting stars do sometimes- fast and quick- it hissed, and the lights, greenish, went out, blinking lights no more.

I always believe that if you’re busy and with no time or no finances to go on a vacation, there are these harbingers that may prompt a little walk down memory lane. To some, it could be a refrain from a favorite folk song. Or a poignant smell of the rain on the driest of grounds. Or a hint of sweetness curled inside your tongue. For me, it is in the blinking lights of a solitary firefly which on a particularly balmy Sunday night, decided to cast a little spell just as I was tucking myself to bed.

It reminded me of those endless summer nights out in the meadows back home. And those carefree summer days of jumping on a river and wading on its cool waters just as the heat begun to seep through our clothes. We would launch stones on the placid surface and send ripples over the other banks. When dusk settled and all we could hear was the orchestral symphony of the crickets, we would have our early dinner of canned sardines infused with copious amount of kalamansi and newly milled rice and just as the night descended on the land, after our meager but satisfying dinner, we would run over the lea and play hide and seek under the light of the moon. There were nights when the moon didn’t peek on the clouds and so the fireflies were in profusion. They (fireflies) would transform trees into dazzling display of cosmic lights: it’s as if Christmas decided to come early in our vast corner of the earth.

We still owned this farm about an hour slow drive from the main town. Before, we still have to tread its familiar gravelly steps and you wouldn’t need a gym membership to keep you fit because an hour’s worth of walking trumped any day in your sweatshirt. Today, if you traversed through its familiar road, changes unfolded: When there were few houses before that lined the unkempt roadside, now, there is an influx of architectural development. When the road seemed to turn into mud slides during a tropical depression and walking seemed laborious, today, you would advise the driver to slow things down because the road is slippery when wet, no pun intended.

We always go every school break where our closest relatives lead a simple life. They don’t have the advancement of electricity and water system. They had accustomed themselves to the darkness with only little lamps fueled by kerosene. To quench their thirst, they brought those huge plastic containers and have them filled with cool waters from the brook, while hushing children because when they happened to upset its stillness, it can result to the ‘browning’ of the surface courtesy of the mud below . And it was always a swell time when laundry day came. There is a congregation of freshly roused-up wives eager to finish the week’s worth of dirty clothes. And the gathering was always the place to catch up on the daily roundups of gossip, where the conversation ran the gamut from the weather yesterday or if their corns were all right and ready for the picking. Sometimes, when the conversations turned to a different route-because that couldn’t be helped- our aunts would let us go somewhere. And we would gladly do so because we really don’t want to carry the newly washed clothes to be hung in the open air and open sun.

When the temperature reached its peaks and when the heat seemed to be all penetrating, we would all catch our siesta deep into the day only to be woken up by the mouth watering aroma of bibingka and puto made from the real corn starch and not the commercially bought that lacks the grit. I was always given the thickest slice and would just beam while drinking the freshly brewed coffee from our little coffee plantation. It’s as if we have our own barista who indulged us with the real caffeine fix. To pass the time because life in the farm could be terribly slow, we would observe the shadows as it changed colours from the deep brown of high noon, to the pale violet when the sun went down. When the time came to gather the clothes from the hanging wires stretched from pole to pole, we would all race to press our faces on the parched clothes and smell the remainders of the passing sun. When there is money from copra, our aunt would buy Downy or similar fabric conditioner and it would be an extra treat for us to bury ourselves on the crisp linen or shirts.

Usually I stayed there for the weekends, or when there is a special occasion. And my cousins would know if I arrived because they could hear my voice echoing from afar. And whenever I arrived, they’re always expectant. In fact, even before we exchanged our usual greetings, they would ransack my bags for telltale signs of town goods. And when I saw them grinned from ear to ear when I brought a treat they like- candies, biscuits, toys, I knew, I made them happy for a while.

Now, that I am chasing the clouds of my dreams, too far away from the plain life I’ve lived from the outskirts of our little, coastal town, I’ve noticed that I am forgetting how to live life simply. I complained when I don’t like the dish served in our table. I used to be pissed off when I cannot buy the books I want because I have to settle our electrical bills. I would torment anybody who’ll listen when I couldn’t go with my friends when they decide to hit the bars. I’ve noticed that, before, I rarely complained with whatever was served on our table. I rarely complained when I only owned this Hans Christian Andersen’s Fairy Tale book which I read to no end. I rarely complained when I was not permitted to join my friends to camp in our former school’s quadrangle at night. These rites of passage made me who I am today. But everything slipped away when I wanted to experience the world on the other side of the fence.

So, when I saw the sole pinpricks of light that is the firefly in my room, I did not think of that old environmental fact that the air in this side of the city is pure. What I remember is the childhood of my past. The raw, memorable childhood that is both carefree and careless. When I had the times of my life catching fireflies in the palms of my hands.
When it hit the maelstrom of my electric fan, and all the lights blinked its final glow, I felt right there and then the death of an age. The end of an era of a life lived simply. I felt like digging the grave of the firefly and to go with it are the bittersweet remembrances of those endless summers.

But when the whirring did not abate and tiny glimpses of weakened glow still pierced the darkness of my room, I rushed to open the lights and I saw the tiny winged lantern, its feeble feet moving as if wanting to soar again and I know I have to do what I need to do. I carefully placed the fallen over my palms, its blinking lights seemed to up, and I felt like 10 again, endless summers in my past started unraveling. I felt whole.

I let it fly outside, to homes and hands of many more that hold dear over their childhood, who would rather not forget that once upon a time, life is simple and fireflies touch a chord. 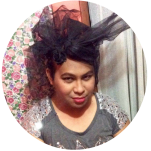 2 thoughts on “The meditations on a firefly”